Notice: Trying to access array offset on value of type bool in /home/etcbcsite/public_html/wp-content/themes/Divi/includes/builder/functions.php on line 1529
 Bootcamp on NLP tools for Syriac | Eep Talstra Centre for Bible and Computer

Bootcamp on NLP tools for Syriac 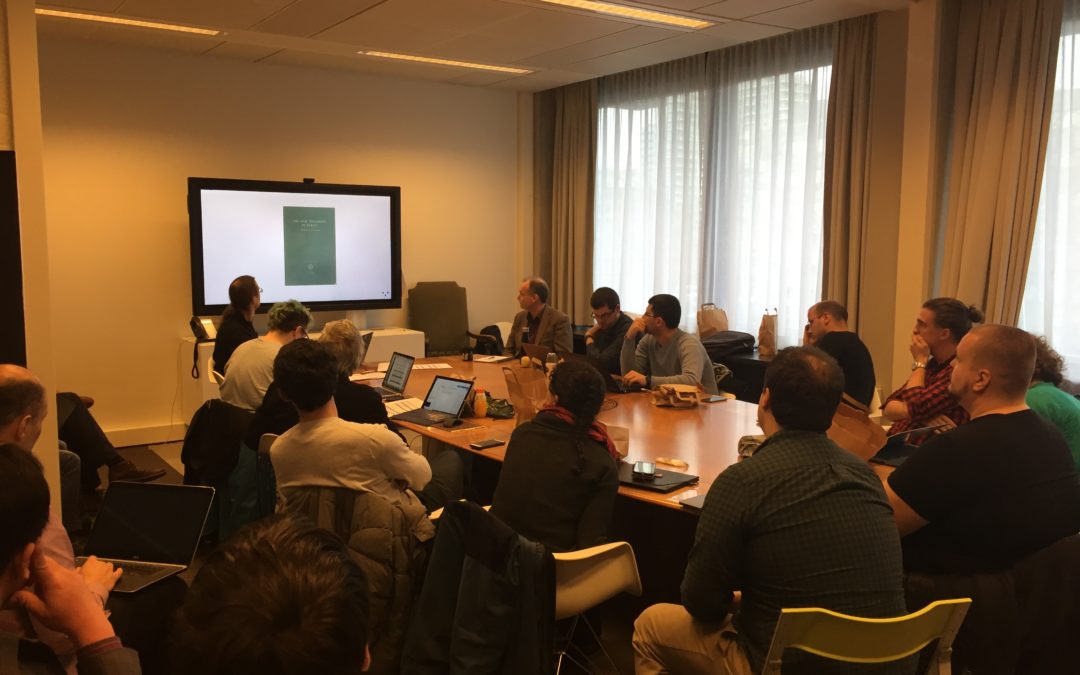 On 17-18 January, the Eep Talstra Centre for Bible and Computer (ETCBC) organised a ‘boot camp’ on NLP tools for Syriac. The response was a bit overwhelming; we had to close the registration well before the deadline, because the limit of twenty-five participants was quickly reached.

The programme consisted of an afternoon (Thursday 17) with presentations and a morning (Friday 18) with break-out sessions. The presentations were introduced by Wido van Peursen, who gave a survey of a work flow for the study of ancient Syriac texts.

Before the break, Hannes Vlaardingerbroek presented a new OCR tool and parsing programs for Syriac. Cody Kingham explained the ETCBC data creation pipeline, which is used both for Hebrew and Syriac.

After the break, Mathias Coeckelbergs showed the work done on geographical data in the project on Linked Data and Syriac Sources. He also gave an introduction into topic modeling. Geert Jan Veldman and Dirk Roorda demonstrated a pipeline from lectionaries to the Peshitta text, a result from the project on linking data from the Syriac liturgy, that started with digitising notes made by Wim Baars, which are kept at the Peshitta Institute. The presentations were regularly interrupted by questions and lively discussion, which made for an informal and fecund atmosphere.

The day was closed with a nice casual dinner in The Basket (the campus café).

The next morning was dedicated to the break-out sessions, which were held in two rounds, so that every participant could attend two sessions. They were centered around the subjects of the presentations of the previous day: OCR, liturgical data, linked data and geographical data, Text-Fabric, and the ETCBC pipeline.

The boot camp was completed with a lunch in the Senate Room of the Faculty of Religion and Theology.

This event was supported financially by the Moorsel and Rijnierse Foundation and the Netherlands Organization for Scientific Research (NWO) for the project Network and Workshop: Linked Data and Syriac Sources.