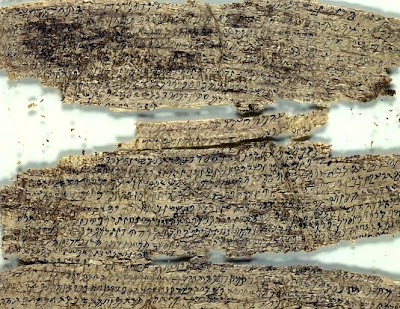 The Eep Talstra Centre for Bible and Computer (ETCBC) is linked to the research group Digital Approaches to Sacred Texts (DAST) at the Faculty of Religion and Theology at the Vrije Universiteit Amsterdam. Since its foundation in 1977 the ETCBC has focused for more than four decades on the Hebrew Bible, which in the course of time was extended to other Hebrew, Aramaic and Syriac texts. The affiliation with the DAST research group provided an opportunity to extend the research scope to other texts and traditions. The underlying idea is that sacred texts, or more broadly, religious texts, have much in common when it comes to their digital analysis. This relates to similar questions regarding the origin and transmission of these texts and their reception in religious communities, but in many cases also similar linguistic challenges. Thus both Semitic languages such as Hebrew and Arabic and Indo-Aryan languages such as Sanskrit and Pāli have a rich morphology, which sets it apart from a language such as English, which serves as the point of the departure for much current computational linguistics and Digital Humanities.

In the last months of 2021, the DAST research group initiated the pilot project “Dhammapada Latine”, dealing with the Latin translation of the Dhammapada. The Dhammapada (“Verses of the Doctrine”) is one of the most important texts of Early Buddhism, written in Pāli. In the nineteenth century these texts became known in Europe through the Latin translation by M. Viggo Fausbøll. This Latin translation is interesting for at least three reasons. First, for the question of how knowledge about Pāli Buddhist texts came to Europe. Second, for the study of Neo-Latin translations (which unfortunately receive little attention from Latinists). And third, for the linguistic comparison of two inflectional Indo-European languages, Pāli, an early Middle Indo-Aryan language, and Latin. 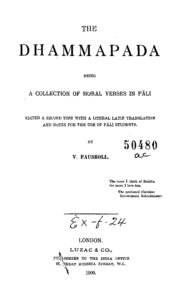 =The aim of the Dhammapada Latine project was to enable the digital comparison of Fausbøll’s Latin translation (2nd edition, 1900) and the underlying Pāli text. The Latin text is available online in PDF, from which an electronic text can be derived. The data was prepared with gentle adaptations to produce a Latin text that accords to contemporary conventions (writing ae instead of Fausbøll’s æ and reverting the Renaissance-era convention to differentiate Latin i into i and j; the differentiation of v into u and v was maintained).

The Pāli text is available on the website of GRETIL (Göttingen Register of Electronic Texts in Indian Languages), which contains a rich collection of texts in Pāli, Sanskrit and other Indian languages. However, to judge Fausbøll’s translation on its merits, this text had to be adapted to Fausbøll’s text edition, which is also the basis for his translation.

The Pāli text and the Latin translations are included in Text-Fabric, a Python package for the analysis of ancient text corpora developed by Dirk Roorda. Text-Fabric allows the user to analyse the text both in a Python context and in a user-friendly browser. At the verse number level, both corpora have been linked, providing an excellent basis for further research.

A challenge for the representation of the Pāli text was the pervasive occurrence of sandhi (saṃdhi). Sandhi refers to phonological changes that result from the combination of morphemes (internal sandhi) or words (external sandhi). With the use of the circumflex (â, ê, ô), Fausbøll marks the external sandhi of contraction (crasis), but not of elision (apocope and apheresis). This is useful for our understanding of Fausbøll’s text interpretation, e.g. regarding the Pāli homonym apheretic enclitica va as eva (emphasis) or iva (comparison).

To access the texts through the Text Fabric package or in the Text-Fabric browser, see https://github.com/ETCBC/dhammapadaI

n the future we hope to add morphological encodings and lexicographical linking of the Pāli and Latin texts.