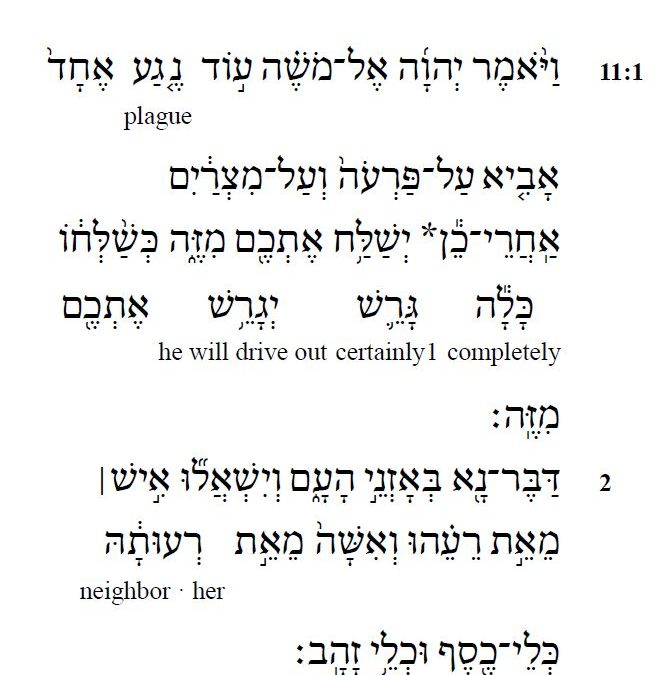 I’m a recent addition to the group of researchers working with the ETCBC database. Here at the VU, I only recently discovered that I was part of the first round of classes designed to train theologians and bible scholars how to code and use the ETCBC database. I had no training on coding previously, and my knowledge is still very basic. But I’m very proud of the fact that after their course I was able to make a very practical tool that I’d like to share with you.

In addition to studying at the VU, I also teach elementary Hebrew at a local seminary. In the process of teaching my students I wondered if there was a way to organize passages or chapters of the Hebrew Bible from simplest to hardest, to make an objective and complete list that could guide our students to the best path to proficiency in the language. So I created a query that does just that, at least with respect to vocabulary. Syntax was not taken into account and according to the latest theories of language acquisition, that’s generally what’s advised; control for vocabulary while structures can be learned through induction and exposure. The optimal texts for students being those that introduce the fewest number of unknown words.

Students of Biblical Hebrew usually learn vocabulary according to a word’s frequency, learning the most frequent first and working down to less frequent words. By the time a student has completed an introductory grammar, most would have memorized all words occurring 100 times and above. So that became my starting point. I’ve attached the results of my query in an excel document, and one interesting thing to note is if you search the results for each chapter of Ruth or Jonah they average to a ranking of 450th  and 447th. Which means that there are on average 450 chapters of the Hebrew Bible that have simpler vocabulary than the chapters in these books. That’s striking because these are generally the first chapters a students will read after completing an introductory grammar book. The reasons for choosing the books are clear enough, professors want short manageable texts that represent a whole unit or book.

However, several institutions also offer reading courses to promote fluency in the language. That’s where this information can be most helpful. Below you will find a list of chapters that could gradually expose students to the vocabulary they are learning by frequency. It’s often the case that students will be memorizing frequent words from one genre while simultaneously limiting their reading selections to simple familiar narratives that may never use the words from their vocabulary. So this approach addresses both the need for texts with a small number of unknown words and identifying the best texts with the new vocabulary students learning as they slowly increase their repertoire of known words.

Below I’ve presented the first 100 chapters of the Hebrew Bible based on my query. The columns of the list represent benchmarks in the students’ journey to acquire vocabulary. When a student knows words with a frequency of 70 and above, then  they could move on to the 2nd column. There are 20 chapters for each column and within a column the chapters are organized according to the Protestant canon. Note, for instance, that in the second column 70 and Above that texts from Leviticus and Isaiah are included. Most teachers would never think to include texts from these books for beginning students and yet the database is telling us that students know 93-97% of all words in these chapters, whereas Ruth averages around 83% of known vocabulary at this stage.

Finally, I’ve also created a custom graded reader using Logos Bible software’s latest feature in their interlinear Hebrew Bible, called “reader’s edition.” It allows me to type in the frequency of words that I’d like to hide from being displayed. The idea being that if I’m supposed to know the word, I don’t want there to be any glosses so that I can attempt to read on my own merits. Personally, I think that’s tremendously important for maintaining the motivation of the students and keeping them engaged with the text for long sustained sessions. I’ve provided below a snapshot of Exodus 11 to illustrate.

So using the criteria I’ve described in the table above, I’ve created a PDF with all these chapters and the custom range of glosses shown to aid the students in rapid reading. I’ve already begun printing out chapters for my students to read in our reading classes, and I believe it represents another tool that teachers can be using in their classrooms today.

If you’d like to email me for more information or feedback I can be reached at jbullard@tyndale-europe.edu 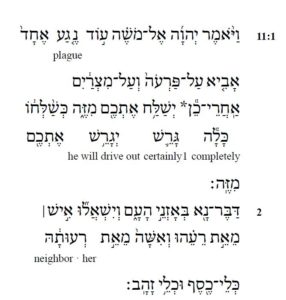