Syntactic Patterns and Translating the Bible 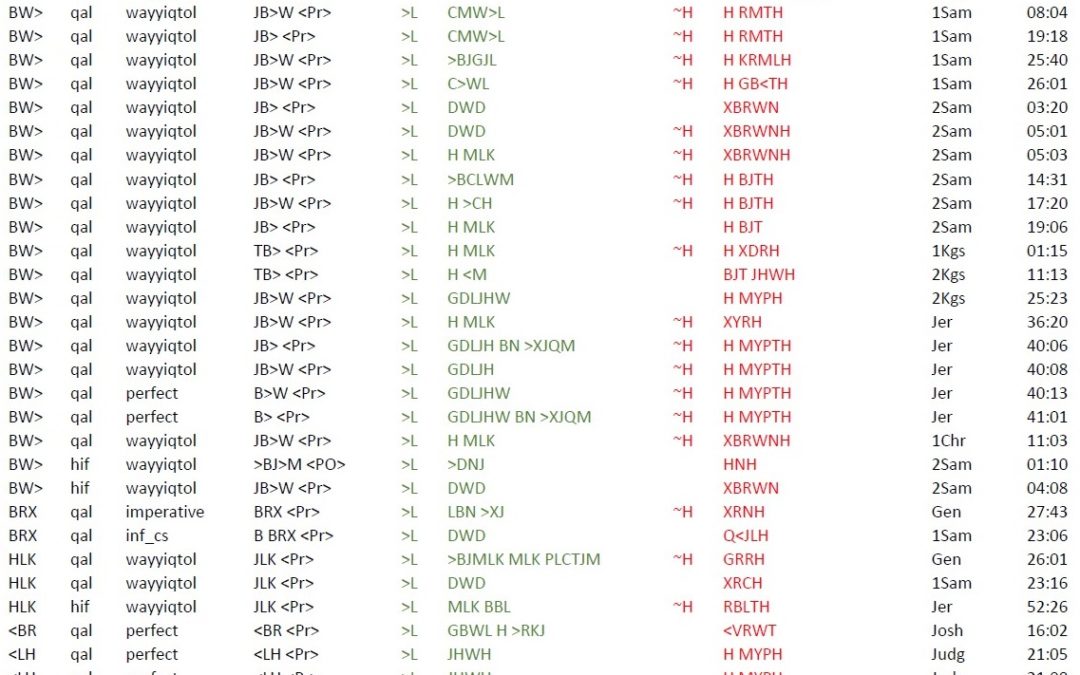 Working as a Bible translator I am not only interested in the meaning and the literary composition of individual texts, but also in the linguistic patterns underlying these texts. Detecting and registering these patterns helps in gaining inside into the grammatical and syntactical rules followed by the biblical writers. The morphologically encoded database of the ETCBC provides the possibility of searching through the Hebrew and Aramaic texts of the Old Testament for such patterns. Using this electronic database, one is able not only to look for individual words and lexemes, but also to search for grammatical connections between clauses and syntactic constructions.

The constructions that have my particular interest are the combinations of verbal forms with other clause constituents. Exporting the parsing of all verbal clauses from the ETCBC-database I have made a CSV file in which the occurrences of all Hebrew verbs in combination with their constituents are stored. This file, which contains more than 67.000 lines, enables me to sort and filter the various patterns of particular verbs, but also to sort and filter the patterns of cognate verbs and particular classes of verbs, such as motion verbs. In doing so, the patterns of cognate verbs and or particular classes of verbs can be compared, so that similarities and differences between the various patterns come to light.

With Janet Dyk I have been looking more closely at the similarities and variation between the syntactic patterns of motion verbs (cf. Oosting & Dyk, ‘Valence Patterns of Motion Verbs: Syntax, Semantics, and Linguistic Variation’, JNSL 43/1 (2017): 63-85). One of the things we discovered was that, when a motion verb occurs with two constituents, one involving a person and the other involving a location, the person is usually mentioned before the location. This can be illustrated by the following texts:

In some cases, however, the reversed order is used, as the following examples show:

Gen 28:5 he went – to Paddan-aram, – to Laban son of Bethuel, the Aramean, the brother of Rebekah, Jacob’s and Esau’s mother
1Sam 22:9 I saw the son of Jesse coming – to Nob, – to Ahimelech son of Ahitub
1Kgs 11:40 but Jeroboam fled – to Egypt,- to King Shishak of Egypt
Jer 27:3 by the hand of the messengers who have come – to Jerusalem – to King Zedekiah of Judah

The reversed order of the two constituents in these examples may be explained by the relative weight of the two phrases: as in many languages, longer or heavier phrases tend to appear further to the end of the clause, thus causing the lighter phrases to precede them. In some cases, however, the element referring to the location precedes the element referring to the person, although the two phrases have a similar weight. These cases are particularly interesting for Bible translators, because the reversed order of the two constituents is most likely caused by the composition of the text, in which the verbal patterns occur. This is well illustrated by the following example:

Gen 18:6 Abraham hastened – into the tent – to Sarah, and said, “Make ready quickly three measures of choice flour, knead it, and make cakes.”

The reversed order of the two constituents puts emphasis on Sarah’s location. While Abraham and his guests are sitting outside of the tent, his wife Sara is preparing the meal inside of the tent. Yet, although Sarah is inside the tent, she can hear every word that is said. Because the location of the personages is an important aspect of the story, the contrast between the two locations should be made clear in the translation of this text.

Another example is found in 1 Kings 2:40, where it is told that Shimei goes to the city of Gath to hunt two of his slaves who have run off to King Achish of Gath.

In this text too, the reversed order of the two constituents puts emphasis on the location of the personages in the story. Shimei was not allowed to leave Jerusalem, because King Solomon had forbidden him do to so. If he went out from this city, he would be killed. Because the location of Shimei plays such an important role in this story, its significance should become apparent in the translation of this text.